A new Semrush study has found that zero-click Google searches aren’t quite the boogeyman they’ve been made out to be in SEO circles in recent years.

Where clicks went. Here’s an image summing up the findings for desktop Google searches:.

And here’s an image summing up the findings for mobile Google searches:

Semrush vs. past studies. SparkToro did a pair of studies (in 2019 and 2020). Here’s Search Engine Land’s coverage of those reports:

Both studies had, let’s say, issues. Barry Schwartz outlined some of those issues on Search Engine Roundtable.

Had there been another analysis this year or last by SparkToro, I’d imagine Google zero-click searches would be somewhere around 85%. (Sorry, couldn’t resist.)

Why we care. Since 2019, there has been a lot of noise made about how Google is stealing clicks for itself. Google’s Danny Sullivan offered more context, pointing out that Google sends more traffic to websites every year and laying out some logical reasons why certain queries don’t end with a click on a website.

Admittedly, two things can be true – Google can send more traffic to websites than ever, and reduce the number of searches that otherwise would have gone to websites had it not introduced its own products or search features that directly compete in organic search.

In my opinion (as well as the opinions of many other smart SEO professionals I know): those past zero-click “studies” were misleading at best, and nonsense at worst. And they got way more attention than they deserved because the math never really added up. I applaud Semrush’s efforts in providing more context and a greater, more nuanced (read: less biased) analysis. 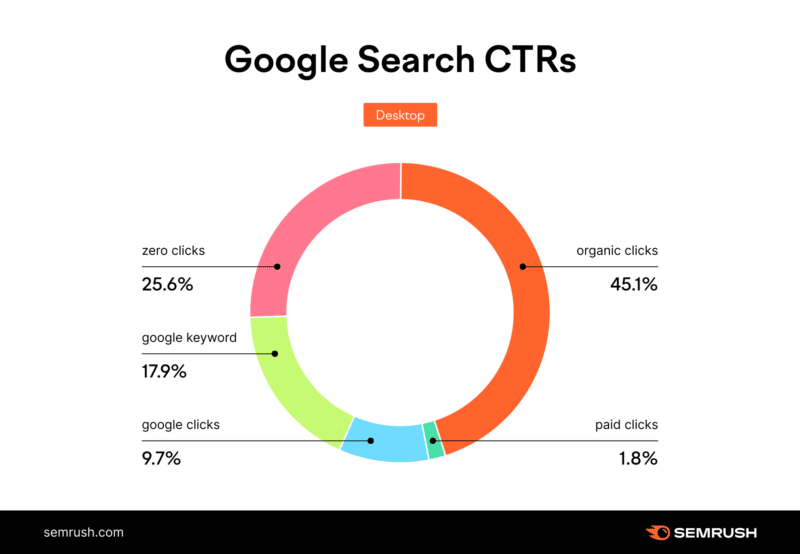